To this end, I propose not only that anti-racist training is a grotesque offensive against all we hold dear, but more to the point, I suggest that we substitute our own anti-reverse racism training in its place. 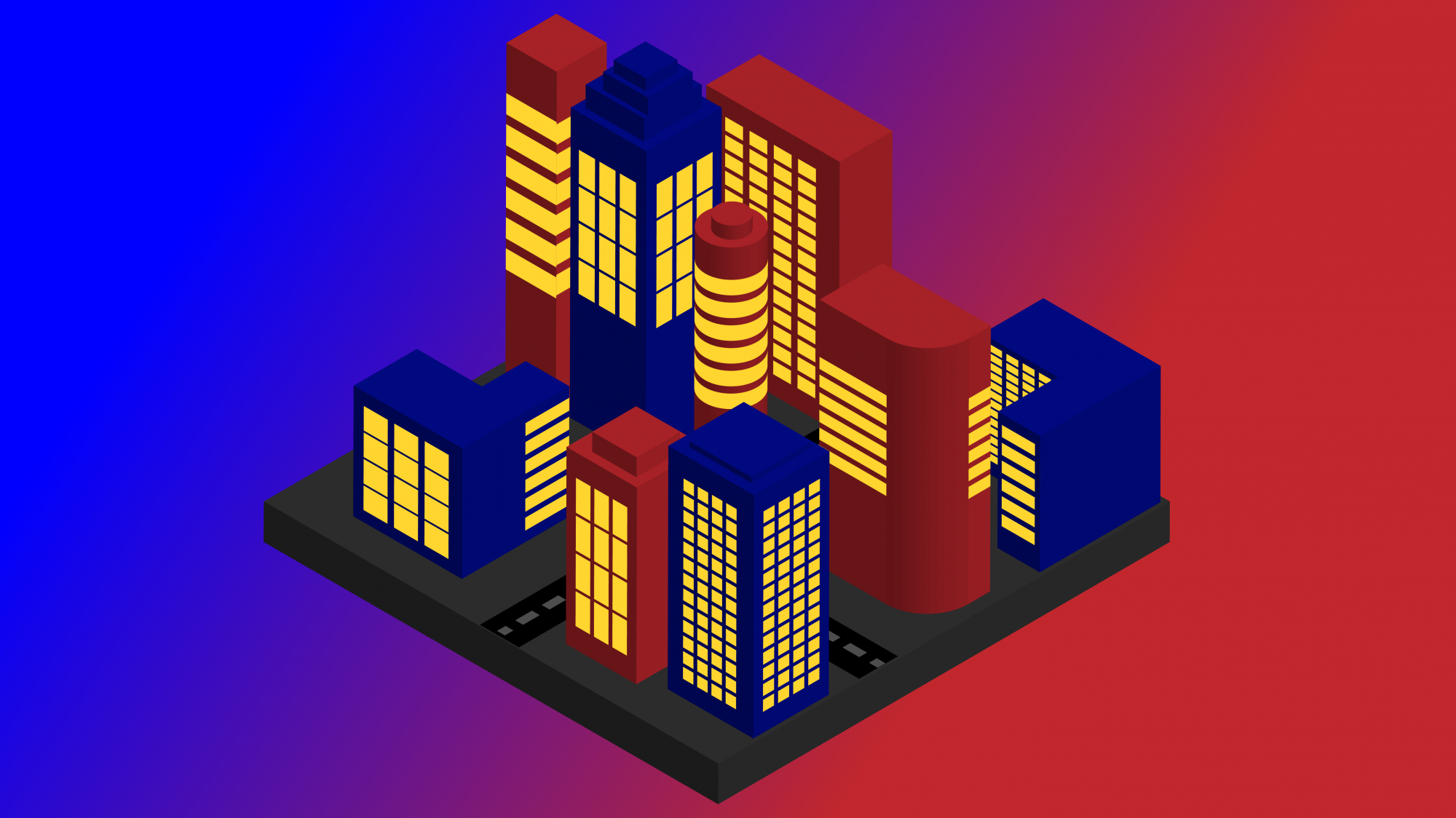 Singer 2020: China should make it happen

But even if Trump triumphs, he will have even less legitimacy than before: clearly, America can't handle this democracy gambit on its own. There is a third option, though, one that America has been gracious enough to impart on the rest of the world in the past: foreign intervention.

No, the Honor Committee should not switch to trial by ordeal

This perfidious reform, inspired without a doubt by the Evil One himself, masquerades as bringing divine justice to a corrupt, human process.

Editorial Board Dissent: We cannot abolish cities. Instead, we should create a single huge city. 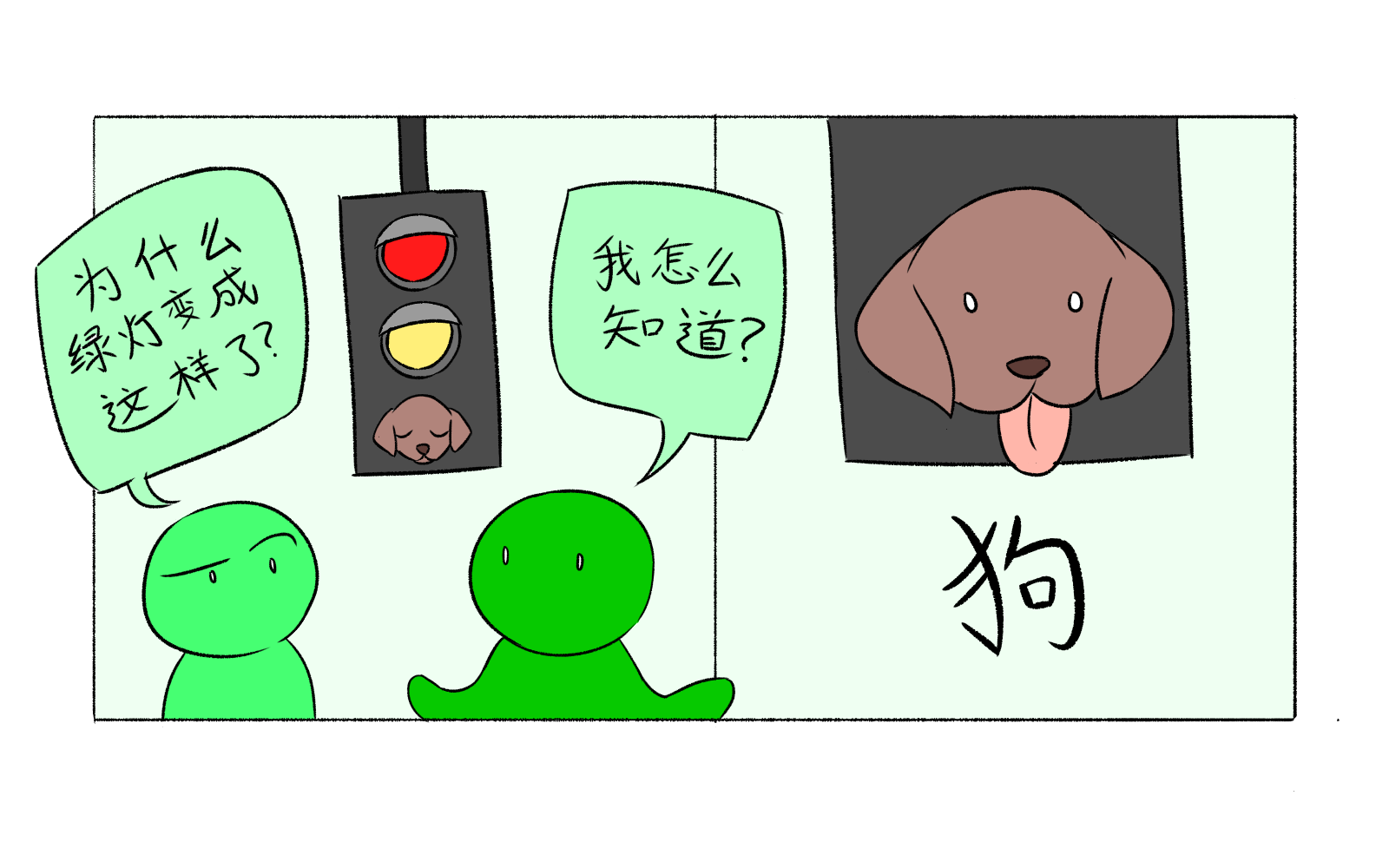 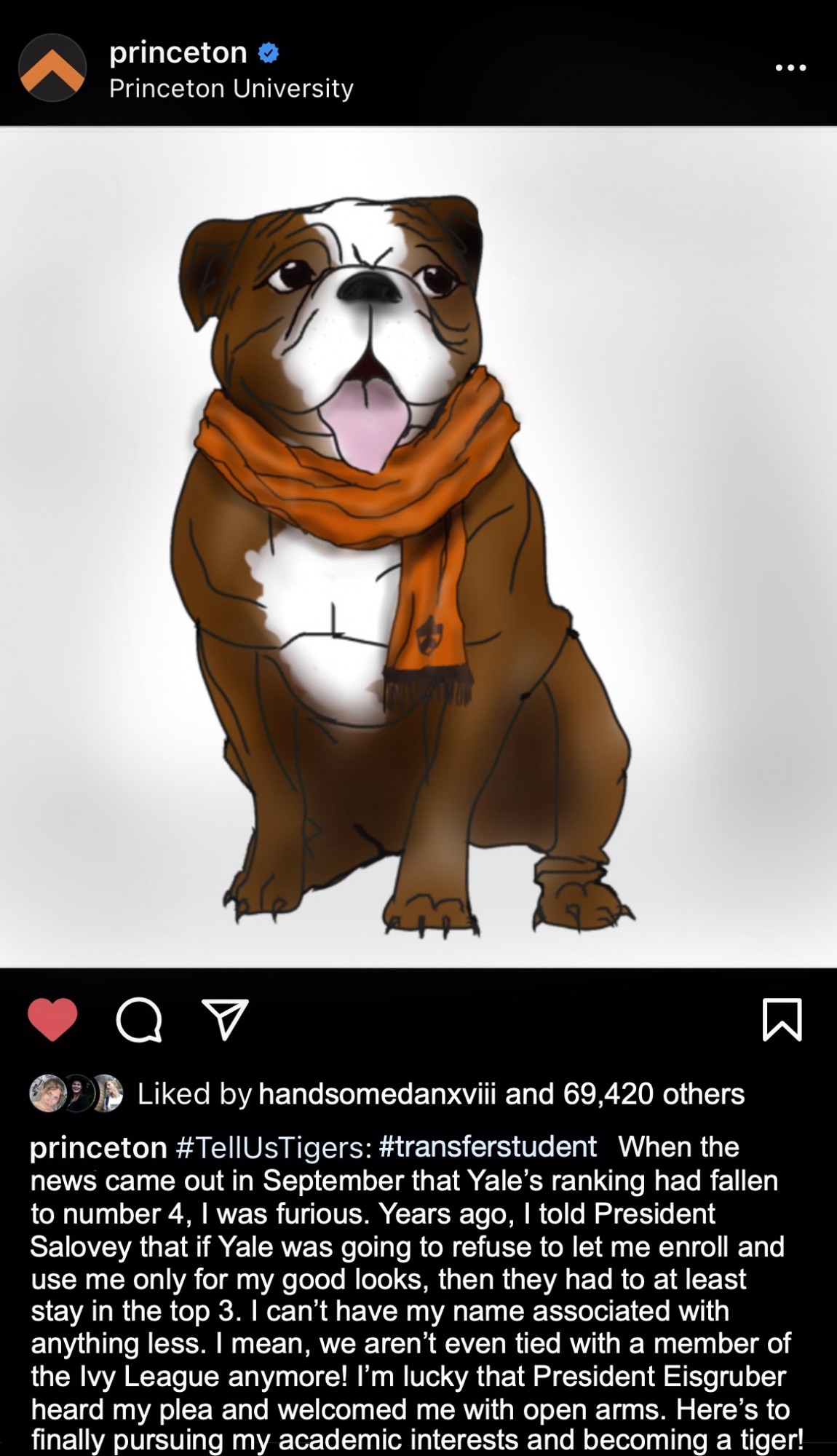 Despite previously petitioning to keep each other off campus, first years, sophomores, juniors, and seniors are calling for “unity” in light of the University’s announcement that all students will be invited back this spring.

By Zachary Shevin and Allan Shen 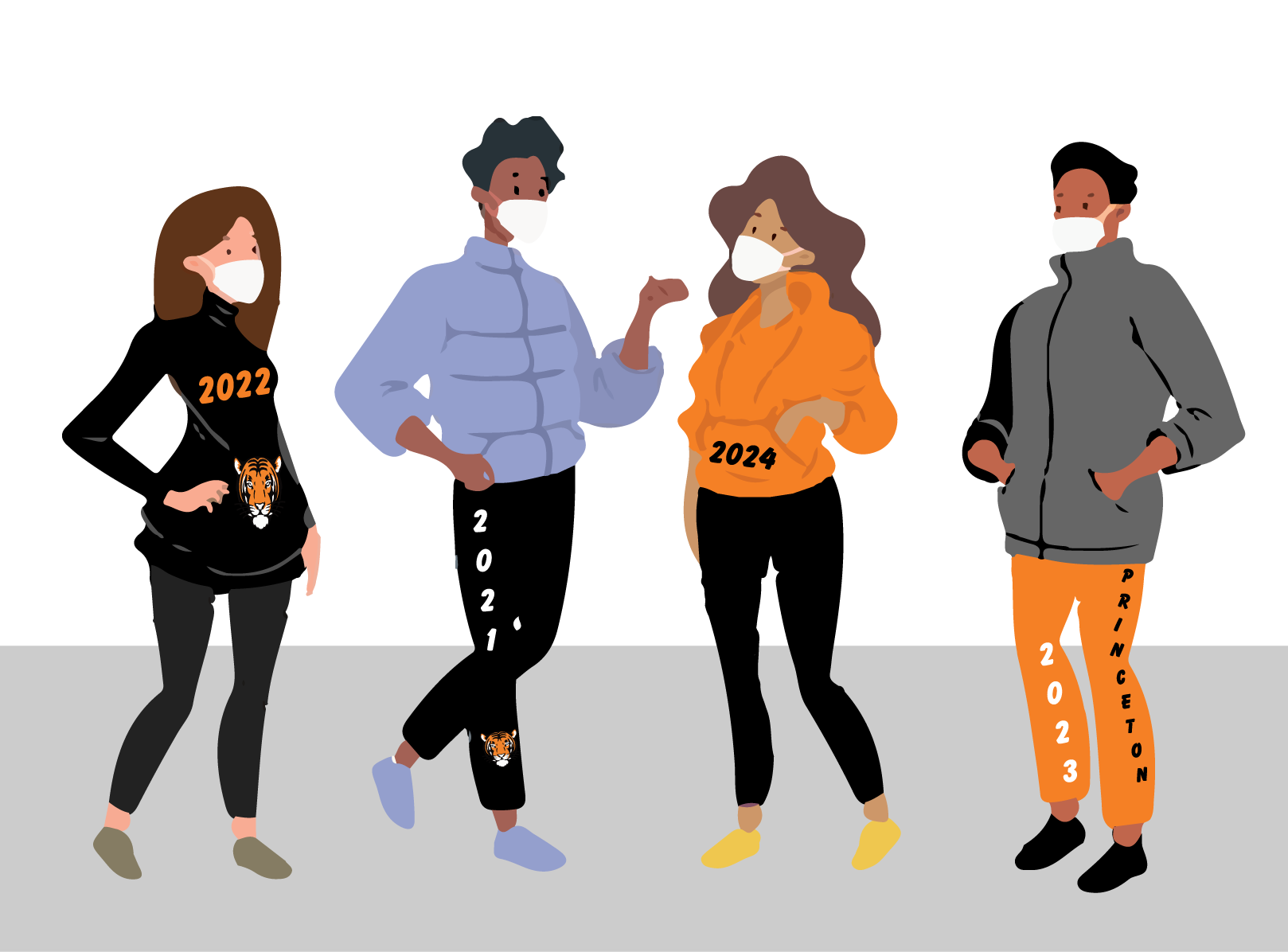 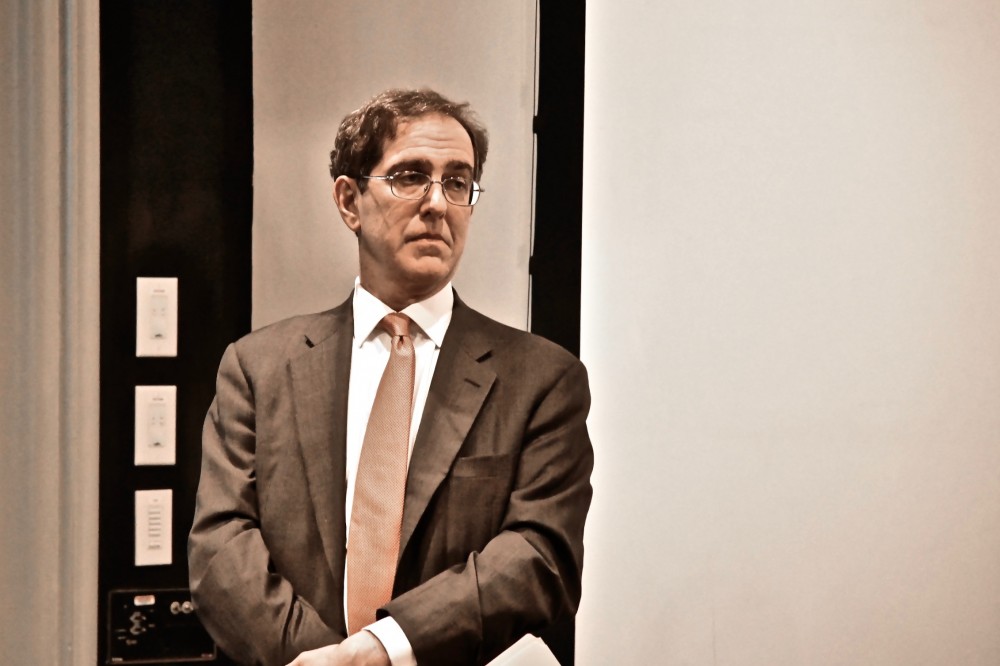 The University’s Campus Message system has been co-opted for President Eisgruber’s personal — and often confusing — use. Last night, at about 9:15 p.m., every Princeton student received an email with the subject line “Campus Message: Felt Cute, Might Delete Later”; enclosed within was a mirror selfie in his office. Students are unsure how to react to the barrage of messages.

The new feature, which has sparked much discussion among students, is more social than administrative, allowing students to share pictures and videos via Instagram and Snapchat story-like clips.

‘Take it into my own hands’: Molecular biology graduate student develops COVID-19 vaccine

Antonia Foochi, a second year graduate student in the Department of Molecular Biology, developed a COVID-19 vaccine in the Lewis Thomas Laboratory over the summer. She spent the fall testing the vaccine on students in her MOL214 precept — to great success.

By Annabelle Duval and Rachel Sturley

By Anna Chung and Sydney Eck

What went wrong: Princeton admissions makes rare statement on changing applications for the Class of 2025

By Julie Levey and Anna Salvatore

Sen. Ted Cruz ’92 complains America is ‘too liberal,’ plans to move back to Canada

A recently-circulated petition calls for an increase of classes offered from 1 to 3 a.m. EST, office hours from 4 a.m. onwards, and USG movie nights at 8 a.m.

By Hadley Kim and Diya Kraybill 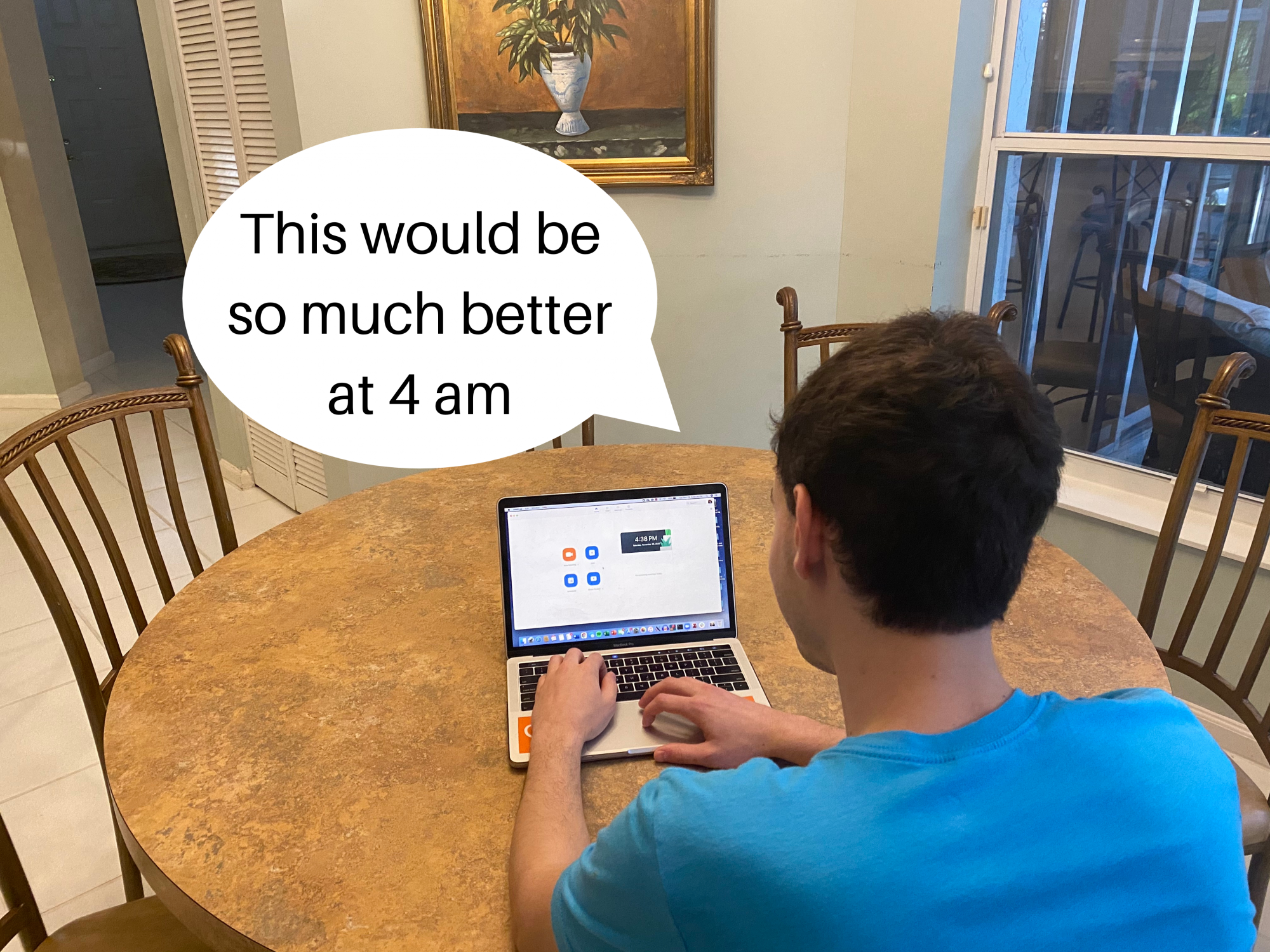 President Christopher Eisgruber ’83 has changed his official title to “Tiger King Eisgruber” amid an ongoing love affair with famed big-cat rights activist and CEO of Big Cat Rescue, Carole Baskin. “What can I say? The two of us really hit it off,” Eisgruber said in an interview over Zoom, “and we’ve been emailing ever since.” 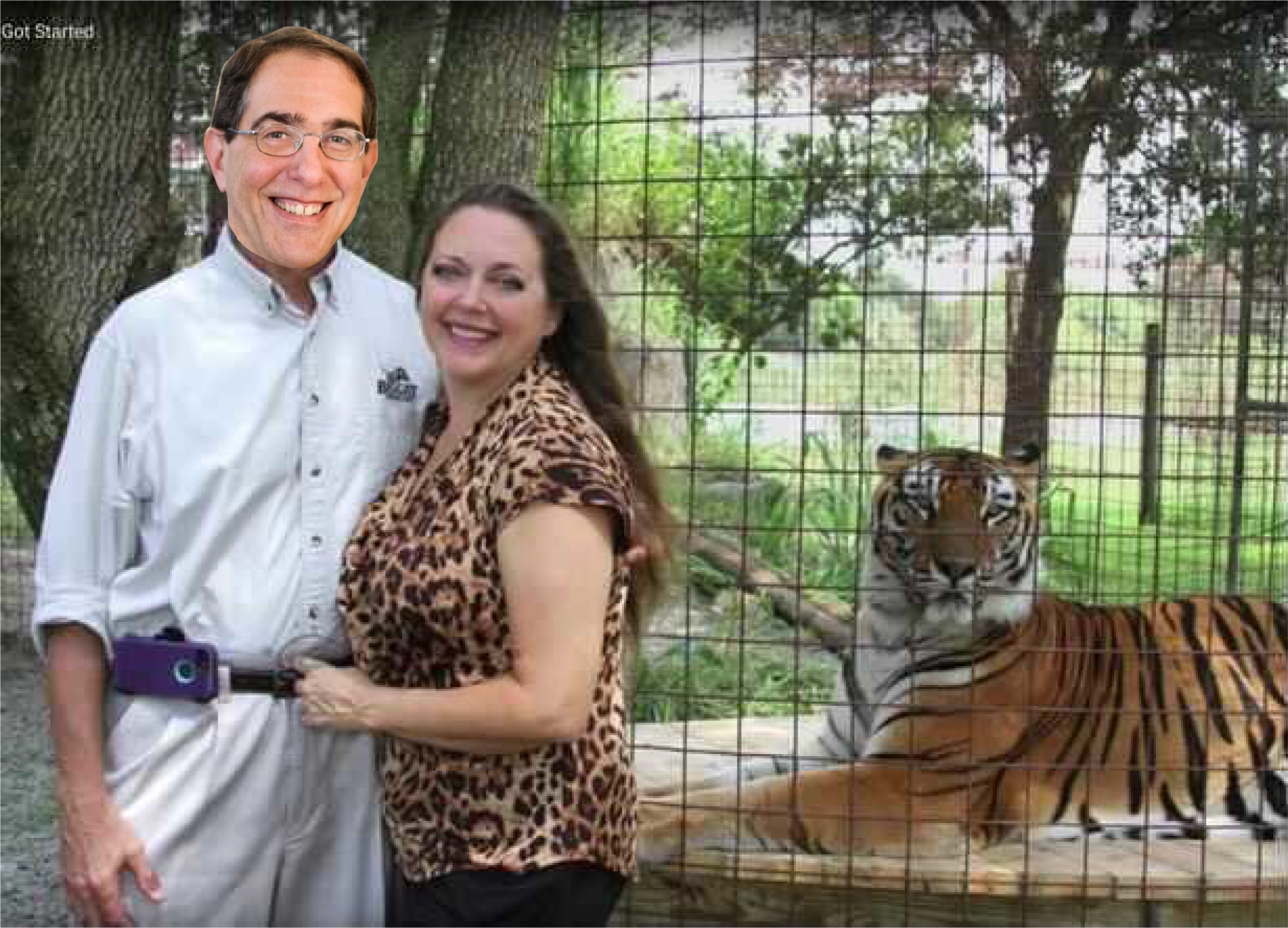 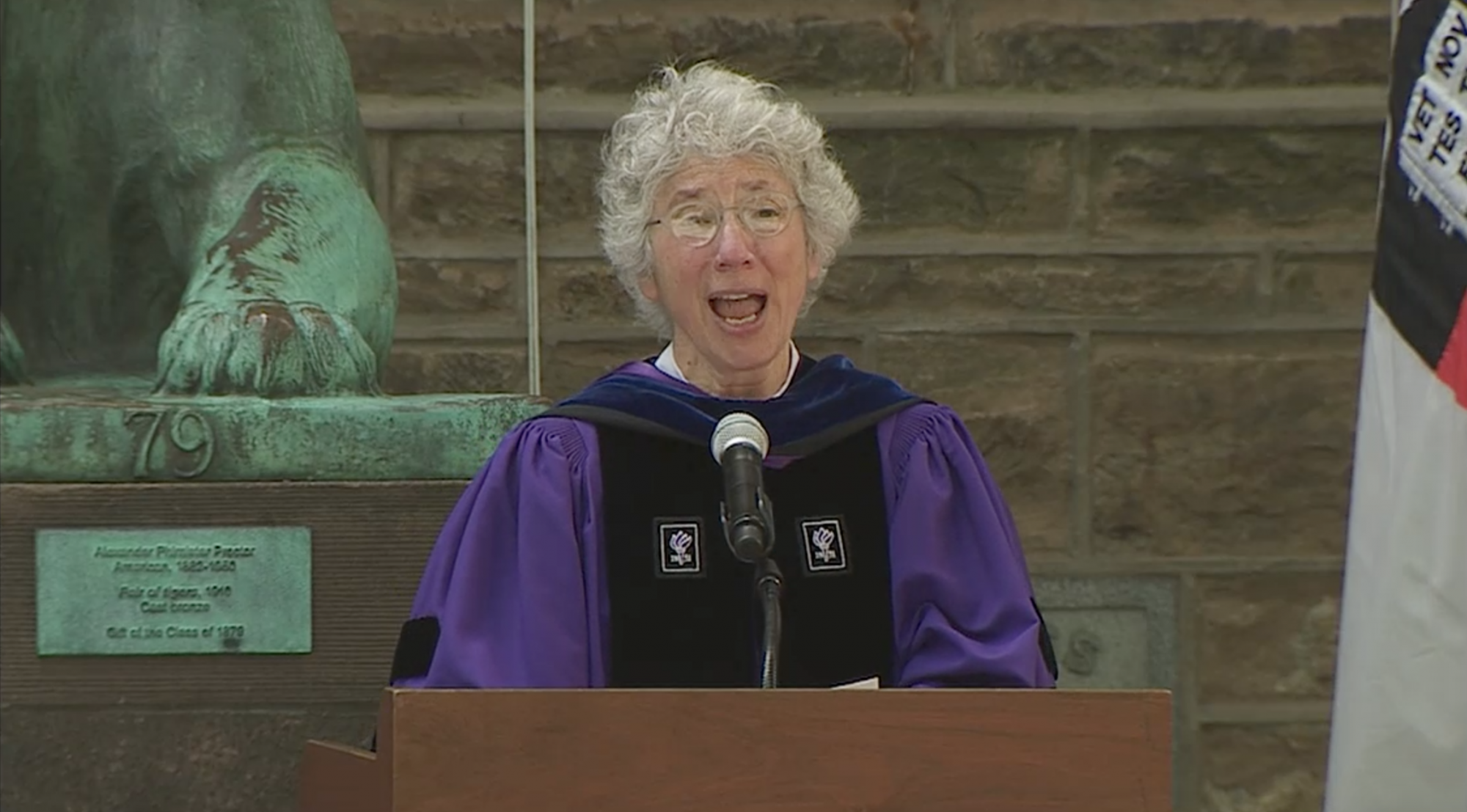 By Alex Gjaja and Tanvi Nibhanupudi

Excluded from the Ivy League presidents’ group chat, Dean Jill Dolan decided to stage a coup. After a failed barricade and tumultuous battle, Dolan claimed victory, declaring herself President of the University. From life in the aftermath, The Daily Princetonian releases a month-long investigation charting Dolan’s rise to power.

Squirrels in Firestone stressed over finals, lack motivation to finish up the semester

With significantly fewer students around, many campus squirrels feel this has been a time to establish a solid footing on campus. The squirrels were able to set up their own Furrinceton University, but are feeling the pressure as finals near. Their wish? For the students to return, and with them, normal life. 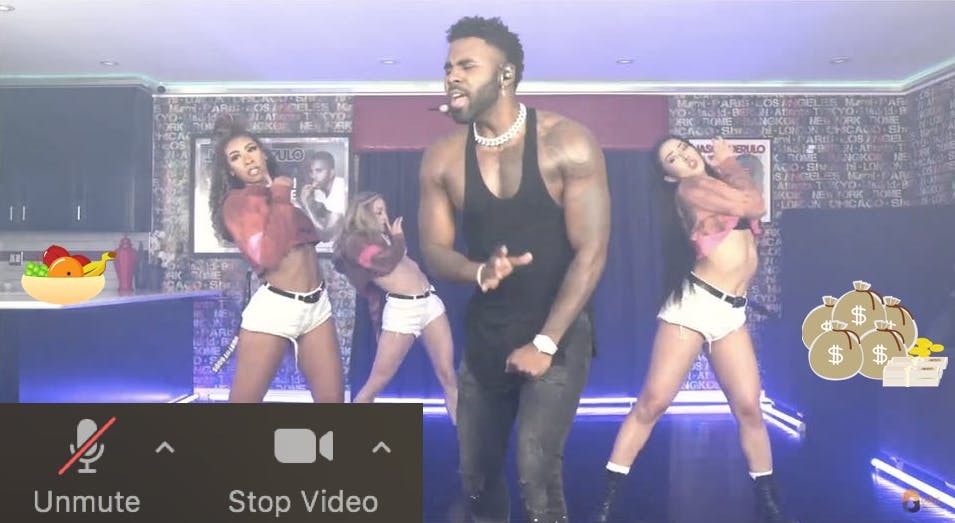 Eisgruber throws it back with dance trends on TikTok

A video of him doing the Renegade has 4000 likes, and his most liked video features him throwing it back to Megan Thee Stallion’s 2020 song “Savage” in front of a green screen image of Nassau Hall. 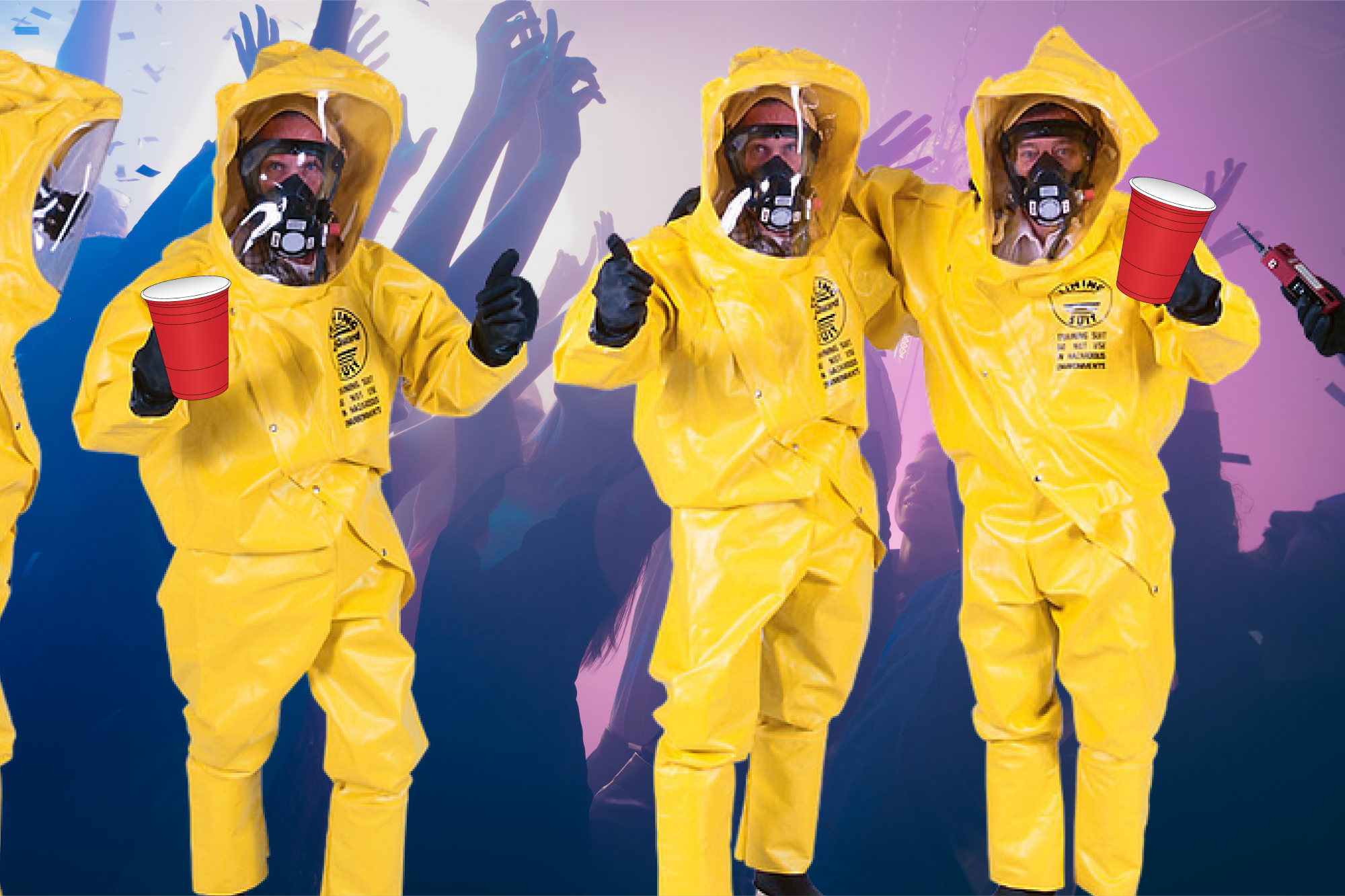 Princeton trustees unanimously vote to ban Among Us, Skribbl.io, and Kahoot 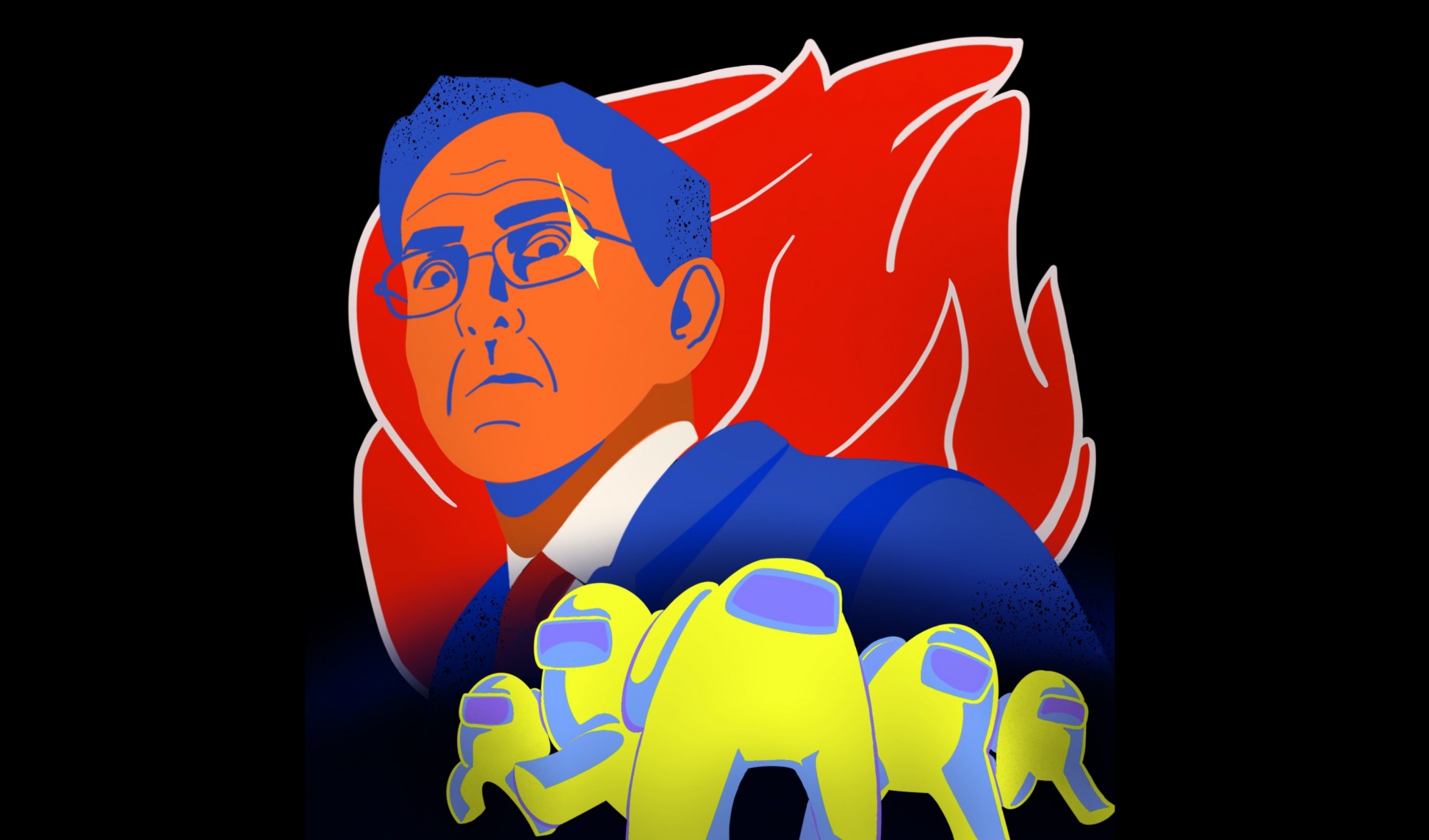 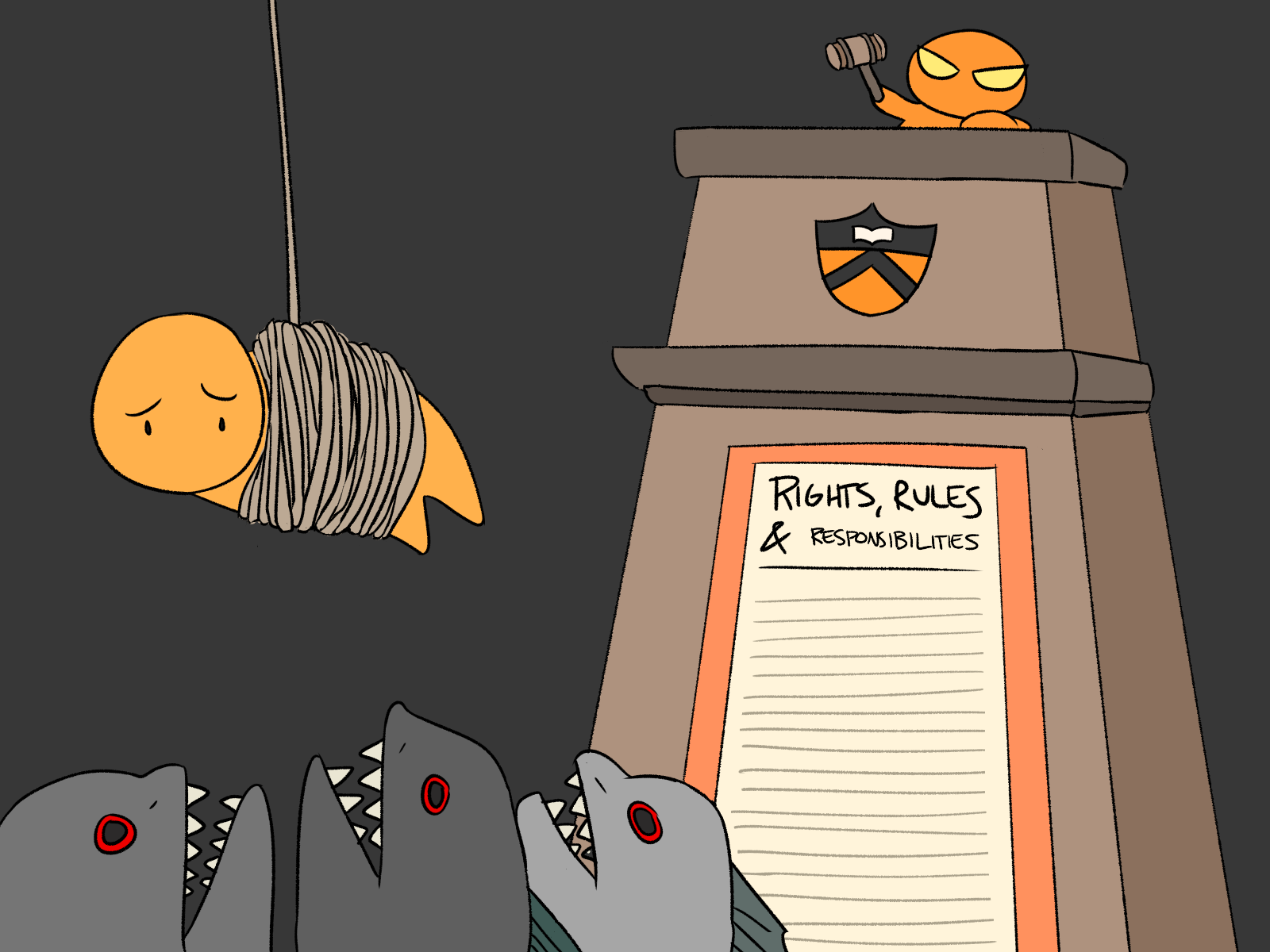 from THE DAILY PRINCETONIAN

*As should be obvious to anyone other than humorless lawyers, The Daily Princetonian is not affiliated with, sponsored by, or connected to The Onion.

*As should be obvious to anyone other than humorless lawyers, The Daily Princetonian is not affiliated with, sponsored by, or connected to The Onion.